Key Findings from the Labour Market, 2013 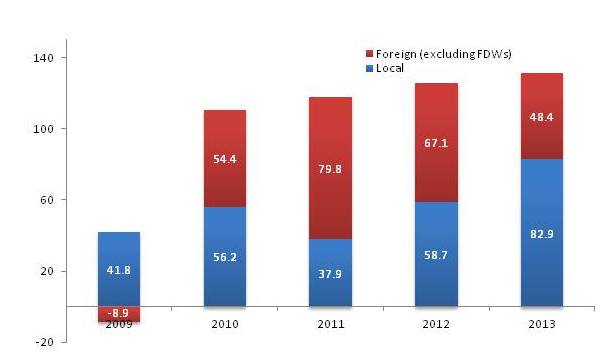 1 Refers to Singapore Citizens and Permanent Residents.
2 Real median gross monthly income (including Employer CPF contributions), deflated by Consumer Price Index (CPI) for all items.
3 Foreign Domestic Workers.
4 The employment rates for older residents aged 55 to 64 and women in the prime-working ages of 25 to 54 rose to new highs of 65.0% and 74.3% in June 2013, from 64.0% and 74.0%, respectively in June 2012.
5 The Dependency Ratio Ceiling (DRC) for Services companies was reduced from 45% to 40%, for all new applications, with effect from 1 July 2013.
6 Data pertain to private sector establishments (each with at least 25 employees) and the public sector.
7 When adjusted using CPI All-items less imputed rentals on owner-occupied accommodation (which have no impact on the cash expenditure of households who are owner-occupiers), real median income growth was 5.2% in 2013.
8 The CPI All-items rose by 2.4% (1.9%) in 2013, compared to 4.6% (3.6%) in 2012. Figures in parenthesis refer to change in CPI All-items less imputed rentals on owner-occupied accommodation.